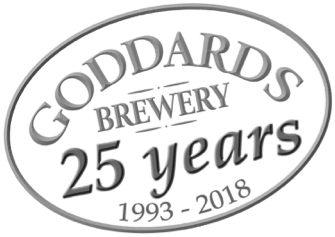 The SALE of Goddards Brewery

Goddards Brewery will be celebrating its 25th anniversary in 2018 and its founder Anthony Goddard sees this milestone as significant for himself and the business. He has now started the search for a worthy and suitable successor to take the brewery forward into the next 25 years.

“Having recently reached the age of 72 I feel that I’m in danger of being past my
‘best-before’ date (if I ever had one),, commented Anthony, “and I don’t think it makes any sense to die in harness. Ideally, I’d like to find a person or business that understands and appreciates what we’ve achieved here at Goddards and who can build upon these really sound foundations.”

Goddards is ‘Isle of Wight Born and Brewed’ and one the country’s best established independent breweries. As well as providing an excellent range of real ales to pubs on the Island, it has an impressive distribution network across the UK. Sales to national supermarkets and multiples including Sainsburys, Waitrose, Tesco and Majestic is a growth area with regular ‘guest ale’ slots with numerous national pub chains such as Fullers, Greene King, Wetherspoon and Mitchells & Butlers.

In 2017 Goddards started contract brewing for others and is one of only about 80 breweries in the country to have achieved the prestigious SALSA accreditation, a testament to the quality of its production process. Recently, this was further enhanced by a significant investment into a top-of-the-range bottling line. Previously the bottling process had to be undertaken on the mainland.

“We’re part of what the government describe as the ‘UK’s brewing powerhouse”, continued Anthony, “the demand for real ales and craft beer shows no sign of diminishing in the UK. Investing in a new brewery is an expensive and risky project. It takes years to acquire the experience and reputation to survive in an increasingly competitive environment. For the right person or business, buying Goddards comes with the advantage that someone else has overcome and dealt with those growing pains.”

The Isle of Wight has an unrivalled reputation for picturesque scenery, stunning coastline and a relaxed way of life; all an hour or so from the M25. Add to this an unusual and exceptional investment opportunity and you have the complete package.

“It’s true. I can think of worse ways to earn a living than owning a brewery and it’s a very genial trade with which to be involved. The past 25 years have been hard work, but tremendous fun and thoroughly rewarding. As a lifestyle I can thoroughly recommend it!,” added Anthony, who continued “every 36 seconds over the past year, a pint brewed at Goddards has been drunk. To date, we have brewed over ten million pints – that’s enough in pint glasses side-by-side to stretch from London to Prague or, if you prefer, from the brewery in Ryde to the southern tip of the Shetland Isles!!”

In many ways Goddards has been one of the pioneers of the “craft beer” movement in the UK having started more than ten years before the term was even heard of in this country. As part of its celebration during its 25th year, the brewery will be bringing back an old favourite – GSB (Goddards Special Bitter). “It was the first ever pint that we brewed back in 1993 and I can’t think of a finer way of marking the occasion,” says the man who started it all 25 years ago.